A review of the new EPO Guidelines

The EPO has issued new Guidelines for Examination covering a range of issues such as the removal or replacement of a feature in a claim, inventive step attacks in oppositions and summons to oral proceedings. Alexander Korenberg and Tom Hamer of Kilburn & Strode assess whether applicants will welcome the changes

The new November 2018 edition of the EPO’s Guidelines for Examination has been published. While the Guidelines are nominally a reflection of current practice at the EPO, the new Guidelines contain several significant changes from the previous edition which will undoubtedly alter how examiners and attorneys approach certain aspects of European law.

We’ve set out below some of the main changes contained in the new Guidelines and what they mean for EPO users.

Assessing the removal or replacement of a feature in a claim

Link to the Guidelines: H-V-3.1: Replacement or removal of features from a claim

As a recap, this part of the Guidelines provides a three-step test to assess whether the removal of a feature from a claim results in the skilled person being presented with new information, and hence whether the removal adds matter under Article 123(2) EPC.

Fittingly enough, we think there are three main changes to the ‘three-step test’:

While this change looks bad for applicants at first glance, the change in fact simply clarifies how the EPO has approached the test in practice, and more importantly, it reflects the developments in Board of Appeal case law. As for any amendment, the overriding question when considering permissibility is what is ‘directly and unambiguously derivable’ from the application as filed. This is often referred to as ‘the gold standard’ by the EPO.

As confirmed by the Boards of Appeal this interpretation is, of course, wrong. The problem referred to in the second step of the test is not the objective technical problem, but rather the problem set out in, or understood from, the original application as filed.

Rather than clarify the matter, the new wording compounds the issue. In asking examiners to be mindful of how the technical problem changes during proceedings, this section of the Guidelines risks inviting the incorrect approach that allows the content of the application as filed to change after the event, and is thus at best unclear and at worst plain wrong.

The explicit removal of the skilled person from this aspect of the test raises questions. Who is the unknown entity who should make this assessment? As a result of this change, has the hurdle represented by the final step of the test been raised, or lowered? 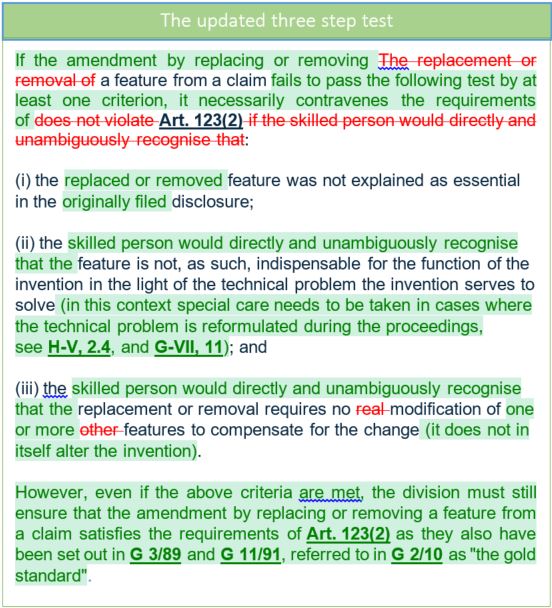 Will applicants welcome these changes?

However, reference to the ‘technical problem’ in the second step of the test is not helpful, as it perpetuates confusion and is not in line with how the Boards of Appeal have clarified the law.

On balance, applicants would not be satisfied with these changes.

Link to the Guidelines: G-VII-5.1: Determination of the closest prior art

The EPO has highlighted to opponents that the first step of the problem-solution approach should be to select the most promising document to arrive at the patentee’s claimed invention, and the new Guidelines suggest that multiple inventive step attacks based on different starting points will be discouraged.

The new Guidelines reference T320/15, a case in which the opponent complained, to no avail, that the opposition division did not allow him to make several selections of the closest prior art document to support several attacks from each of those documents.

The increasing reluctance of opposition divisions to consider multiple inventive step attacks has been noticed by attorneys at Kilburn & Strode (and no doubt elsewhere). As European attorneys, we have probably all been present during oral proceedings while the opponent, with an air of increasing desperation, presents weaker and weaker inventive step attacks to the mounting irritation of the opposition division chair. The unfortunate among us have even been that opponent.

This change will bring more focus to opposition proceedings and should increase efficiency and predictability. Patentees may find comfort in the new wording, as it suggests that the EPO is likely to ask the opponent to justify themselves in cases with multiple inventive step attacks, and possibly to refuse to consider different inventive step attacks if they are unable to do so. This provides a ray of hope for those patentees hoping to avoid the last-minute dash to rearrange another overnight stay near the EPO as the opponent pulls attack after attack out of the hat.

Link to the Guidelines: C-III-5: Summons to oral proceedings as the first action in examination

By way of background, a new procedural mechanism was introduced in 2017 which allows an examining division to issue a summons to oral proceedings as a first action in examination, but only in ‘exceptional circumstances’. This new procedural possibility was seized upon by at least some examiners, no doubt feeling the pressure of the EPO’s ‘early certainty’ initiative.

The new change stipulates that a division may only issue a summons as a first action if, in its opinion, “there is no prospect of granting the application, even taking into account the applicant's reply to the search opinion”.

The new Guidelines also encourage examining divisions to inform applicants in a telephone call if they are considering issuing a summons to oral proceedings as the first action in examination. 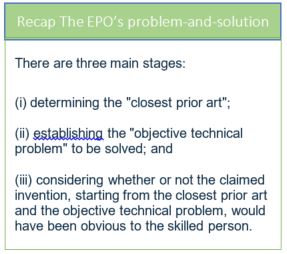 The changes seem aimed at curtailing the issuance of summons as a first action in examination. A summons to oral proceedings can represent significant costs for an applicant, and a greater likelihood of being able to present arguments and amendments in writing will no doubt be welcomed.

Encouraging telephone calls between the examiner and the representative is also a welcome addition.  A conversation over the phone presents an opportunity to clear up issues in a matter of minutes and contact with the division at this stage can help both sides better understand the issues at hand.

More guidance on the question of ‘what is technical?’

The most extensive updates to the Guidelines can be found in the sections detailing how examiners should assess the patentability of mathematical methods, mental acts, business methods, and programs for computers.

The new sections are certainly helpful, but contain no surprises. The sections have been re-written for increased clarity, and several useful examples have been added. There are new sections too, which deal with technology, such as methods of simulation, design or modelling, computer-implemented data structures and data formats, and AI and machine learning inventions.

It appears that an opportunity has been missed to recognise the technological importance of AI and machine learning as such, i.e. for example, it would appear that any fundamental advances in AI and machine learning that are not specific to a particular application or hardware remain unpatentable. We’ll explore this in detail in our next article. 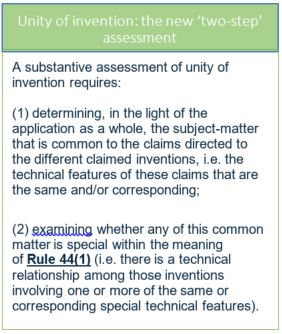 The new Guidelines give many useful examples of the type of specific applications which the EPO should consider technical, and the approach to patentability of ‘borderline’ subject matter set out in the Guidelines is in line with the case law of the Boards of Appeal.

Applicants would welcome this change.

What else has changed?

The Guidelines include a re-structured section on unity of invention, and revisions of sections on undisclosed disclaimers and independent claim formulations for distributed computing environments (e.g. cloud computing). While not introducing substantive new content, these sections are clearer and better structured.

The new guidance on unity of invention reformulates the assessment as a two-step test. The revised section on undisclosed disclaimers stresses that the introduction of an undisclosed disclaimer to restore novelty, e.g.  over documents which accidentally anticipate the invention, is not allowed if it seeks to remove more than necessary to restore novelty.

The new Guidelines state that examiners should assess inventive step and sufficiency of disclosure without regard to the disclaimer. This confirms current practice.

Finally, the EPO has confirmed its practice of accepting claims directed to each specific entity of a distributed computer system, and has also added a suggestion that applicants may consider claiming the entire system as a whole. The example given in the new section is that of a transmitter device configured to perform a method, a receiver device configured to perform a corresponding method, a system comprising the transmitter and receiver, and two separate computer readable medium claims directed to each of the transmitting and receiving methods.

Applicants are likely to welcome the coherent guidance on unity, and also confirmation and clarity on established EPO practices on undisclosed disclaimers and claims formulations for computing systems. In particular, this approach clarifies that an independent claim for the combined system can be included, which was often refused based on the previous version of the Guidelines.

Overall, will applicants welcome the changes in the November 2018 edition of the Guidelines for Examination?

Yes. The new Guidelines are clearer and, following an extensive review of the case law by the EPO, are better in line with how the Board of Appeal has developed the law. The revision which, in our view, is least helpful, is the section on the three-step test for assessing the removal or replacement of a feature in a claim. Despite clear guidance from the Board of Appeal, the EPO has muddied the waters over which ‘technical problem’ should be considered. Time will tell whether the EPO will clarify this in future editions of the Guidelines.