Print
Share
loading dialog...
Artificial intelligence (AI) and machine learning (ML) techniques are of rapidly growing importance to our society and are already ubiquitous in many aspects of our lives. It seems that every day there is another announcement of a new and fascinating application of AI, whether it be related to self-driving cars, drug discovery, speech recognition or medical diagnostics.

AI and ML are, fundamentally, based on innovations in mathematical algorithms. Since mathematical methods, as such, are not considered capable of being inventions in accordance with the European Patent Convention, this begs the question: can artificial intelligence and machine learning innovations be patented in Europe?
The importance of this question has been widely recognised and an attempt has been made to address this in the latest revision of the EPO’s Guidelines for Examination which instruct EPO examiners on how to examine cases. Read our previous article on the new EPO Guidelines here.

The new edition of the European Patent Office’s Guidelines for Examination came into effect this month. Among the many substantive changes, the EPO re-wrote the section on the patentability of mathematical methods and introduced specific guidance on applications directed to machine learning and artificial intelligence. These new sections can be found here: G-II-3.3 to 3.3.2.

Receiving specific guidance from the patent office on rapidly developing technical fields, such as ML and AI, is useful for both applicants and attorneys. Clear guidance on how examiners will assess applications which relate to AI and ML helps attorneys better advise their clients and helps potential applicants in the AI space decide whether to use the patent system or to rely on other forms of protection such as trade secrets.

While increased clarity is always welcomed, it is of course equally important that the guidance is fundamentally correct – whether it is consistent with the practice for other mathematics based methods, and whether the EPO Boards of Appeal are developing the law in the right way to address a technical field which is becoming more and more important to society.

What do the new examination guidelines say about AI and ML? 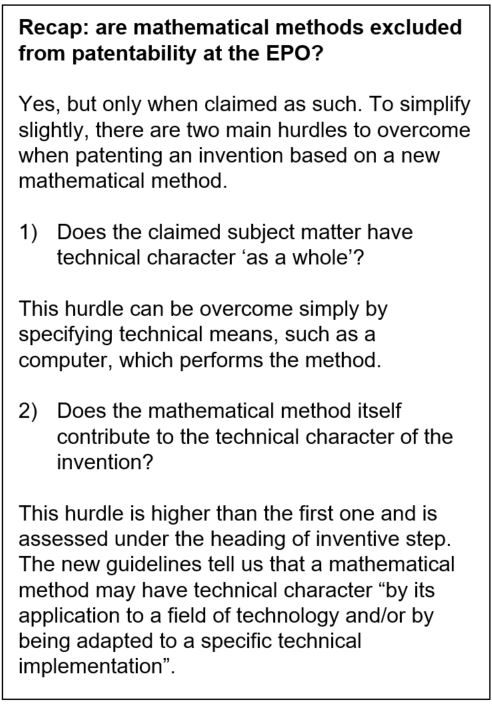 Particular examples are given of AI inventions which do have technical character and hence can be patented, e.g. the use of a neural network in a heart-monitoring apparatus for the purpose of identifying irregular heartbeats. But what if the algorithm used for identifying irregular heartbeats has other technical uses? Could the algorithm be used, or trivially adapted, to identify irregularities in other types of data?

Under the current guidance, the algorithm cannot be patented without being specifically adapted to a specific technical field, and therefore any other uses of the algorithm would require separate patent applications. Taking a step back from this result, consider this: does it really make sense that, when an inventor has created something really useful which has multiple applications in the field of AI, they should be forced to limit their patent application to only a single particular technical field of use by claiming an algorithm specifically adapted to that field or to a specific hardware implementation?

Bear in mind that this last point is likely to require a relatively narrow scope of claim. In order to be ‘specifically adapted’ for a particular technical implementation, an AI or ML algorithm should be adapted to specific hardware in a manner relevant for the particular technical implementation. For example, the applicant may be forced to specify how data is distributed between different types of memory, and thus how the algorithm is adapted to a specific memory structure. Another example could be the recitation of algorithm features that are specific to facilitate parallel processing on co-processors.

The example given in the guidelines is of the specific adaptation of a polynomial reduction algorithm to exploit word-size shifts which is “matched to the word size of the computer hardware”. Specifying the presence of a generic computer or processor would not be enough to make the claimed matter specifically adapted for a particular technical implementation, even if a true technical effect such as reduced compute requirements results. A particular implementation requires something that goes beyond just generic processing hardware and specific adaption requires algorithm features that are motivated by or interact with the particular technical implementation.

Does the new guidance lead European examiners to the correct result for AI/ML inventions?

That’s an interesting question. What “correct” means is of course open to debate but as a threshold matter we would suggest that “correct” should at least include consistency with how the EPO examines other areas of technology that are similarly based heavily on innovation in mathematics or algorithms that, per se, are of an abstract nature.

Based on our experiences at the EPO, let’s take a look at whether the below examples are likely to be regarded as inventions at the EPO:
It seems a fair assumption that classifying data with a machine is a technical task pertaining to technology, especially by comparison with the other examples given above. On this assumption, one could be forgiven for expecting that a new ML classification algorithm, when used by a machine for machine classification, should be patentable, whether in the form of a method or a computer configured to implement the method.
In other words, and to use the language used by the EPO to assess inventive step, if the new ML algorithm results in improved computing performance, for example in terms of quicker convergence or inference, in terms of better accuracy of classification, or in terms of better generalisation to new types of data, one would expect that such an improvement provides a technical effect that could underpin patentability. This would be consistent with the views expressed by some EPO examiners in informal discussions, and would also be consistent with how algorithms are treated in other technical fields such as data compression or cryptography.
Yet, applying the guidance given in the new guidelines, it would seem that the answer to the question of patentability would be “no” for a claim to a computer executing a new ML algorithm which provides quicker or improved convergence or better generalisation. There is no specific technical application beyond machine learning of data in general, and the improvement resides in the algorithm itself, rather than in its adaptation to a specific technical implementation. If this is indeed borne out in the EPO’s examining practice, and we have initial indications that it already is, the practice pertaining to machine learning and artificial intelligence would be different from that of other algorithm-based technologies such as data compression or cryptography. Is this the intended result?

Applying the new guidelines, any claim to a pure AI or ML algorithm implemented on a computer risks being refused under the new Guidelines using the reasoning explained above. Giving details of the class of algorithm being used, e.g. support vector machine, reasoning engine, or neural network, is unlikely to rescue the claim, as the guidelines specifically state that such models are per se of an abstract mathematical nature.
To give an AI-related claim the best chance at the EPO, it should be limited to a particular technical implementation or purpose, for example a neural network specifically adapted to provide a medical diagnosis based on data representing physiological measurements, or a deep learning engine which uses computer vision to control a self-driving car.
The approach set out in the new guidelines risks removing access to the patent system as a way to exploit innovation, research and development for companies who are working on improving AI at a fundamental level. Such improvements may address some of the most important issues in the field, which could have huge implications for techniques across multiple technical implementations, for example, making the training of an AI model more efficient, giving the model better generalisation ability, and improving error detection in a training data set used for training an AI system. The new guidelines suggest that these fundamental innovations are unlikely to be rewarded with a European patent.

What next for AI/ML inventions in Europe?

In the future, if applications which claim fundamental improvements to AI and ML techniques are regularly refused at the EPO, more and more applicants will turn to trade secrets to protect their fundamental advances in AI. These advances may therefore never become known to the public, despite the fact that it is exactly these types of advances which would be most beneficial for the wider industry if they were disclosed.

If the letter of the new guidelines is followed, it will be difficult for examiners to justify granting broad patents even in circumstances where an important technical effect is achieved by a computer executing a new AI or ML algorithm, in spite of fundamental algorithmic innovations being regularly rewarded with patent protection in other fields such as cryptography. If borne out, this is clearly not a desirable state of affairs.
It has been suggested that legislative change would be needed to adequately protect fundamental innovation in AI and ML. However, in our view this is not the case. Applying the current law, fundamental technological advances in algorithms (or the technical effect they bring about) are recognised in other technical fields such as cryptography. All that is needed, therefore, is the recognition that ML and AI are themselves technical fields of endeavour. Despite, perhaps unfortunate, anthropomorphic terminology (“learning”, “intelligence”) AI and ML enable computers to carry out a myriad of technical tasks and it is difficult to see how methods that change a computer to adapt it to carry out new computing function in response to training data are not technical but rather should be considered abstract mathematical methods. This seems to be out of touch with today’s technological environment.
What remains, therefore, is to see how examiners apply the new guidelines moving forwards, and hope that technological sense prevails. Ultimately, the question of whether AI and ML are technical endeavours, so that fundamental advances in these technical fields are eligible for patent protection, will have to be decided by the Boards of Appeal of the EPO. We believe that such clarification cannot come soon enough.