A review of the EPO opposition procedure

Print
Share
loading dialog...
Ilya Kazi and Miranda Kent of Mathys & Squire analyse the changes to the EPO’s opposition procedure and suggest ways in which businesses can align their strategy with the current legal tools available

Opposition procedure at the European Patent Office (EPO) has long been a relatively cost-effective and efficient way to invalidate patents, especially compared to litigating a European patent in even a single European national court, let alone litigating in every relevant European jurisdiction. Recent changes in EPO procedure have made it an even more attractive tool for protecting business interests from competitors’ patents.

For those who are not already familiar with it, the European opposition procedure is intended to allow any third party to seek revocation of a granted patent within nine months of grant. This can result in complete revocation, or limitation. The process can bring to the EPO’s attention circumstances, normally prior art, of which the EPO was not previously aware. It allows competitors to put forward evidence of prior use that is generally not documented in search databases, or evidence of insufficiency backed up by experimental data, which is also not within the scope of normal examination at the EPO. It is also common for other parties to take a harsher view of novelty or inventive step or the formal compliance of amendments (added matter) than the examiner took.

There are a number of commercial reasons why oppositions are filed.  An obvious reason is that the opponent is directly concerned that they may infringe the patent. It is worth noting that opposition proceedings at the EPO have the advantage of effectively being launched anonymously (via a straw man) and thus filing an opposition does not immediately indicate to a proprietor the identity of a possible infringer. This is an important contrast to court proceedings for invalidation which are likely to provoke a counterclaim for infringement and tend to become rapidly more expensive and build momentum.

However, even with no specific threat, it often makes commercial sense to clarify or try to cut down the scope of monopoly granted to create a clearer patch. This has become much more of an issue since the recent UK Supreme Court case Actavis v EliLilly (2017) which potentially broadens patent scope and has made it much harder for a company to be confident it is operating outside the scope of a granted patent. A few years ago it might have been a reasonable approach to obtain a credible opinion on non-infringement and/or invalidity in respect of key competitor patents and sit tight. Now with greater uncertainty as a result of Actavis, and particularly with greater trade in patents where broad patents in a field may be sold on to patent assertion entities, if there is any risk, the cost of opposing to try to mitigate that risk is small compared to the cost of dealing with any threatened litigation.

Even if an opposition does not result in revocation, sometimes a statement from the proprietor indicating how the claims should be interpreted can be helpful in clarifying that the claims do not cover the opponent’s products and reducing the litigation risk or uncertainty (even if there is no formal estoppel, courts will consider such issues). Companies above a certain minimum size and market maturity therefore generally put in place active watching strategies. However, it is important to manage that pragmatically with a trusted advisor as there is, of course, potential to run up large costs opposing many patents of minimal relevance.

In some areas, many companies routinely file oppositions against their competitors’ patents. This is often a strategic approach to avoid their competitors growing an excessive patent thicket wherever there may be potential interest, as well as where there is a specific infringement risk. Conversely a strategy to reduce the opposition risk is to increase the number of filings so the cost to a competitor of opposing all potentially relevant patents becomes higher.
The numbers of oppositions filed varies hugely depending on the technology. For example, many are filed in the fields of pharmaceuticals, security documents (money, passports etc.), aircraft, and medical devices. In fields, such as ICT and telecommunications, oppositions are rarer and tend to be filed only in exceptional circumstances as the value of each individual patent is often much less than in other fields (such as pharmaceuticals), and the number of patents is greater. An exception is patents which are likely to become standard essential.

Historically all procedures before the EPO have been rather slow, with applicants waiting in some cases five to 10 years (or even longer) before grant. Some European patents have only been granted after the end of their 20 year life. Similarly, oppositions used to take upwards of three to four years before a decision, and then were often followed by an appeal lasting at least as long. This caused commercial issues for many companies.  However, recently the EPO has been making a concerted effort to address this, hiring more examiners to get on top of the backlog of cases, and introducing ambitious targets and internal incentives for examiners to ensure new cases are dealt with in a timely manner. 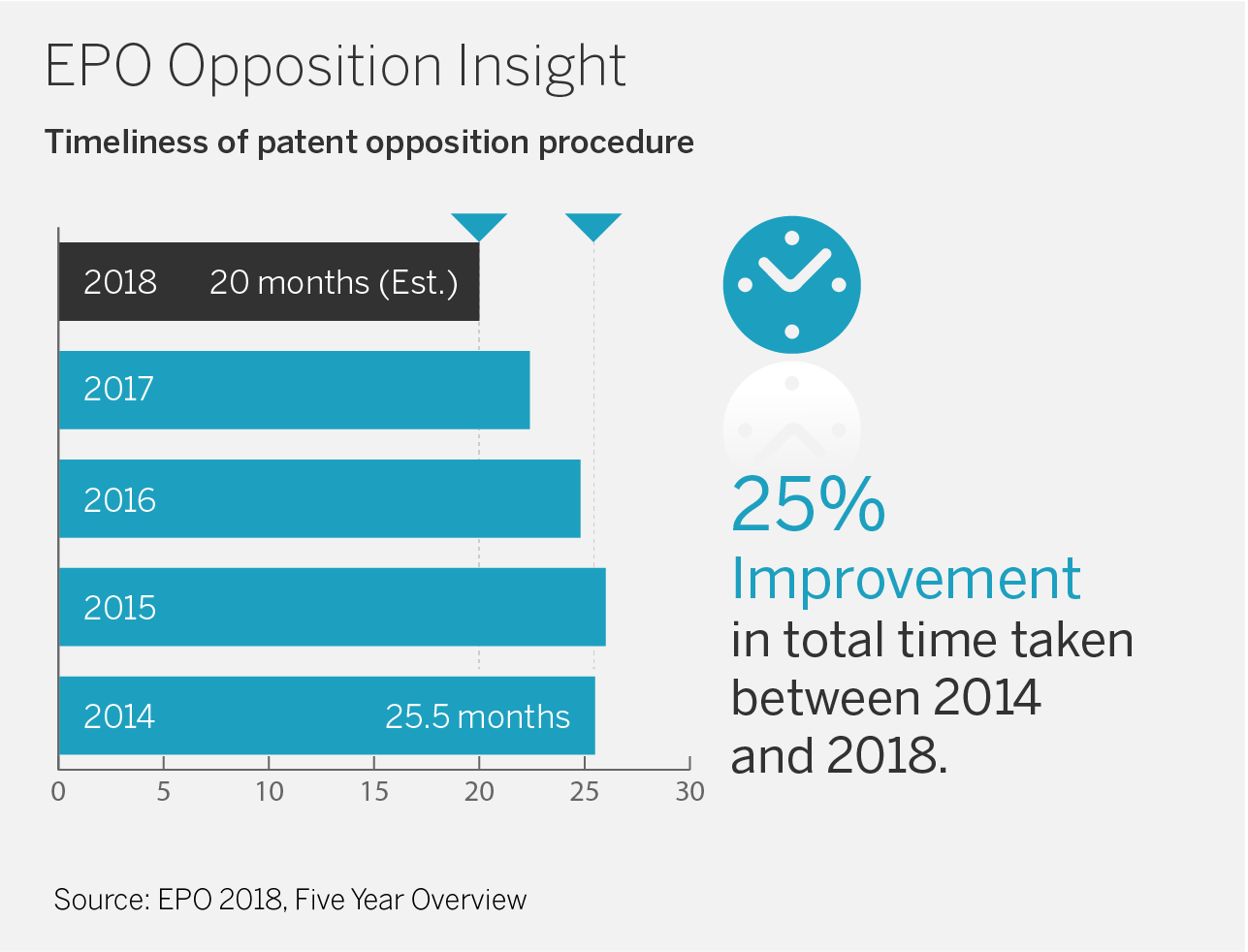 The so-called “Early Certainty” initiative started with searches and now almost all European searches are conducted within six months of filing. When the EPO conducts an international search for PCT applications, results are even quicker, with the majority meeting the three-month target. Once the target had been met for searching, the EPO moved onto opposition procedures.  The Early Certainty from Opposition programme is intended to bring proceedings to a speedy conclusion to establish legal certainty for all parties to the opposition and for the public.

The aim is for straightforward cases to be dealt with within 15 months of the end of the opposition period (i.e. within 24 months of grant). Changes to the procedure now mean extensions for the patentee to reply to the Opposition Notice are less likely to be granted, and a well-reasoned summons to oral proceedings is likely to follow shortly afterwards, where previously the EPO may have invited (or permitted) the parties to submit several rounds of comments in writing. 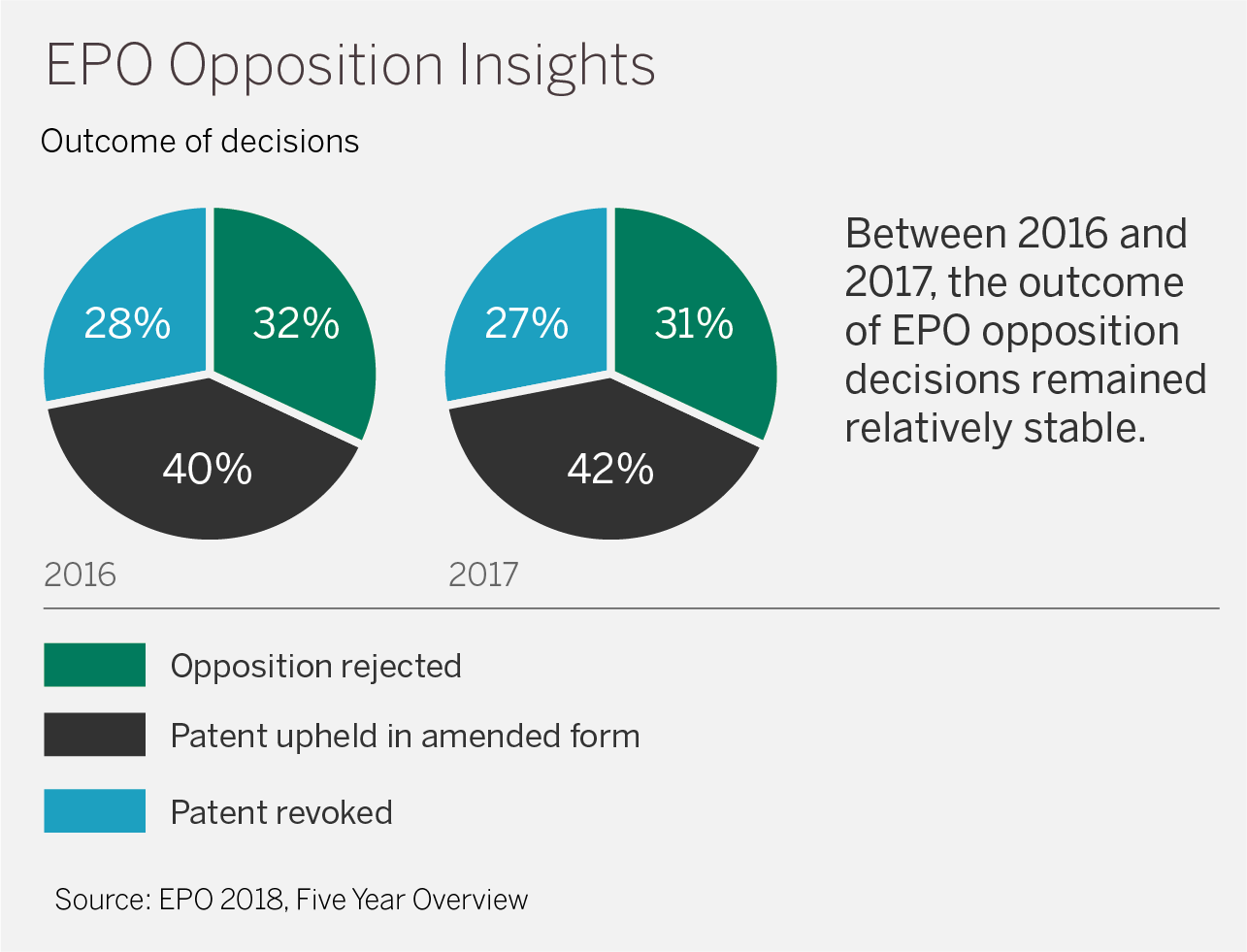 Of course, this is not the end of the story. Due to the commercial value, roughly half of opposition cases are appealed and we are yet to see a large reduction in time for appeal cases, with the Board of Appeal taking at least three to four years to come to a decision.  However, changes are underway to the appeal procedure.

As to the outcome of appeal proceedings, as can be seen from the Outcome of Decisions graphic, in about 40% of cases the appeal is dismissed (i.e. the opposition decision stands) which is a reasonable endorsement of the opposition process. In the remainder, the outcome is that about 20% are revoked and 20% are upheld in amended form. Only 5% are upheld unamended and 10% are sent back for further issues to be considered by the opposition division.  Opposition divisions are trying harder to examine all issues first time round so that more appeals can be finally conclusive.

The new virtual opposition directorates are only dealing with oppositions filed from the start of 2018 so few decisions from the new directorates have yet been issued. It will be interesting to see how the new directorates change the opposition procedure and whether there is an impact on the handling of oppositions. The expectation is we should see more consistency in providing detailed and well-reasoned preliminary opinions with the summons to oral proceedings.  In addition, the old practice of an opposition division usually comprising the examiner who had granted the case led to a feeling that the examiner would be less inclined to reverse an earlier decision particularly on admissibility of amendments. While in some fields the original examiner may retain a role as second member, this concern should also be reduced. 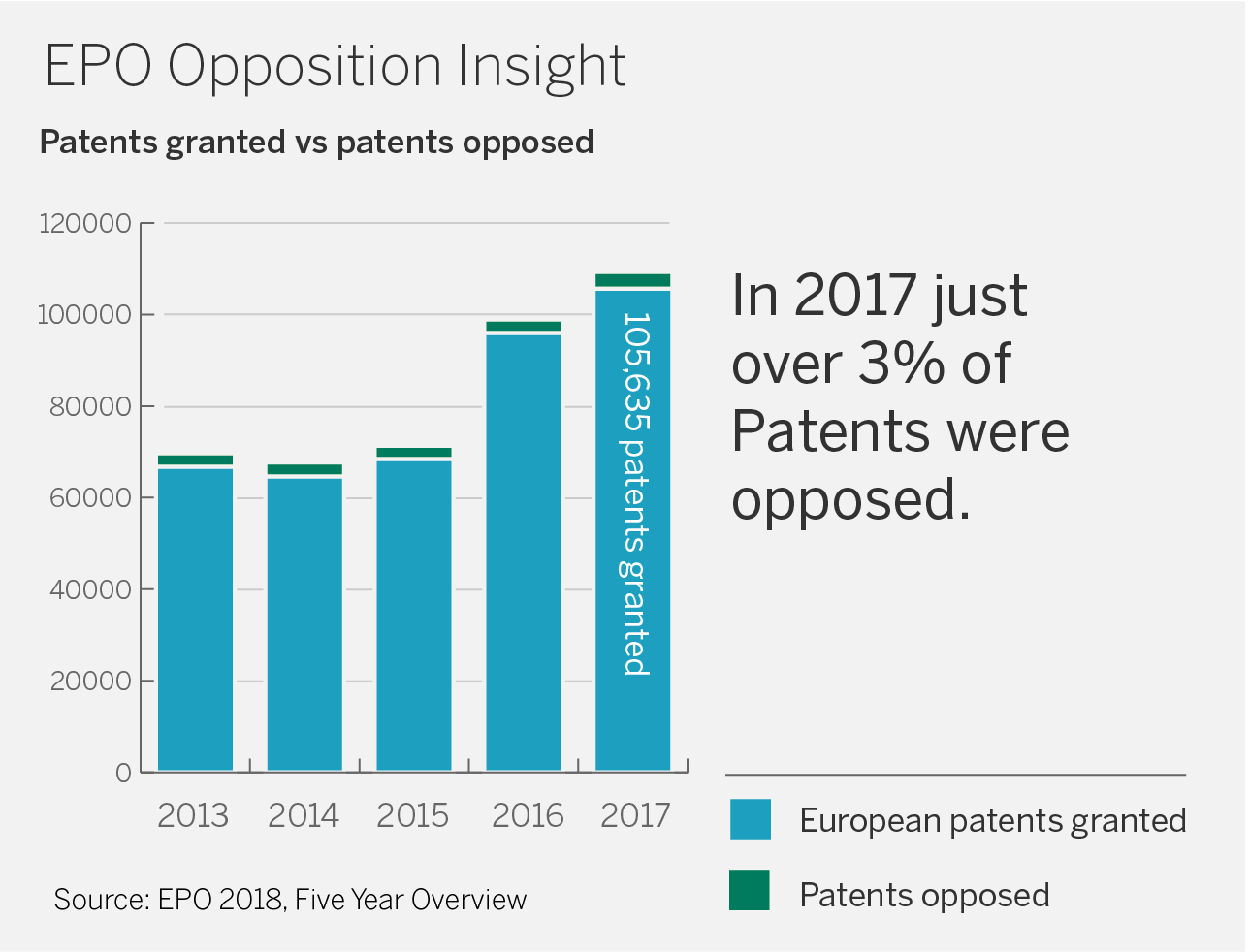 However, the number of oppositions filed has remained fairly constant, hovering around 3,000 per year, and thus the proportion of European patents that are opposed has decreased from 4.4% in 2013 to just 3.5% in 2017.  It is hard to say whether this is because companies have limited budget for oppositions and are reluctant to file more, or because they are less concerned about the patents that are being granted.

Some concerns have been expressed that the increased pace of examination and pressure on examiners for quicker turnover of files will result in a decrease in quality of the patents granted, potentially with relevant documents being missed in a hasty search and amendments that add matter being allowed. Traditionally many have looked to the outcome of oppositions to measure the quality, the thinking being that if quality is decreasing this will show up in more patents being amended or revoked. So far the long-standing trend of one third of oppositions being rejected (patent maintained as granted), one third having the patent upheld in amended form and one third having the patent revoked, has been maintained. However it is probably too early to see the impact yet since opposition proceedings for patents which have been searched and examined under Early Certainty are unlikely to have been concluded.

With a shortened opposition timeline, the costs are often reduced as there is less scope for several rounds of communication before a summons is issued. Furthermore, more detailed preliminary opinions accompanying the summons issued by more experienced divisions in the new virtual opposition directorate should focus submissions earlier on the key issues that the case will turn on. Thus even the submissions that parties do submit should be more concise and end up costing less.

New rules of procedure of the Boards of Appeal

The Boards of Appeal are currently preparing new rules of procedure in an attempt to increase efficiency and predictability (following a consultation earlier this year). While we do not know what the final version will say, we expect that appeal boards are going to become stricter on new evidence and changes of case. It has been suggested that it will become harder to get into the appeal proceedings any request or evidence that was not submitted at first instance (even if submitted at the outset of the appeal).
This could mean opposition divisions are swamped by large numbers of requests to cover any eventuality (regardless of the preliminary opinion of the opposition division) to ensure the appeal board will admit them later. For example, we have heard of one case where the patent proprietor, as the chairman was announcing the opposition division had decided to maintain the patent as granted, asked to submit further auxiliary requests based on the arguments they had heard from the opponent that day, simply so they would not be precluded from submitting them in any appeal proceedings under the new rules of procedure. It will be interesting to see whether opposition proceedings become longer again, as divisions have more to consider at first instance.

The EPO is changing its approach, possibly faster now than at any time since it was founded. This is having an effect on opposition procedure and you may wish to review your strategy. As the number of patents being granted increases and with a potentially much broader legal approach to patent interpretation, companies may wish to take a closer look at their competitors’ patents to assess the risks and chances of reducing that risk at opposition. With the lower costs that come with shorter, more efficient opposition proceedings, it may now be worth filing oppositions where previously the costs were seen to outweigh the benefits. 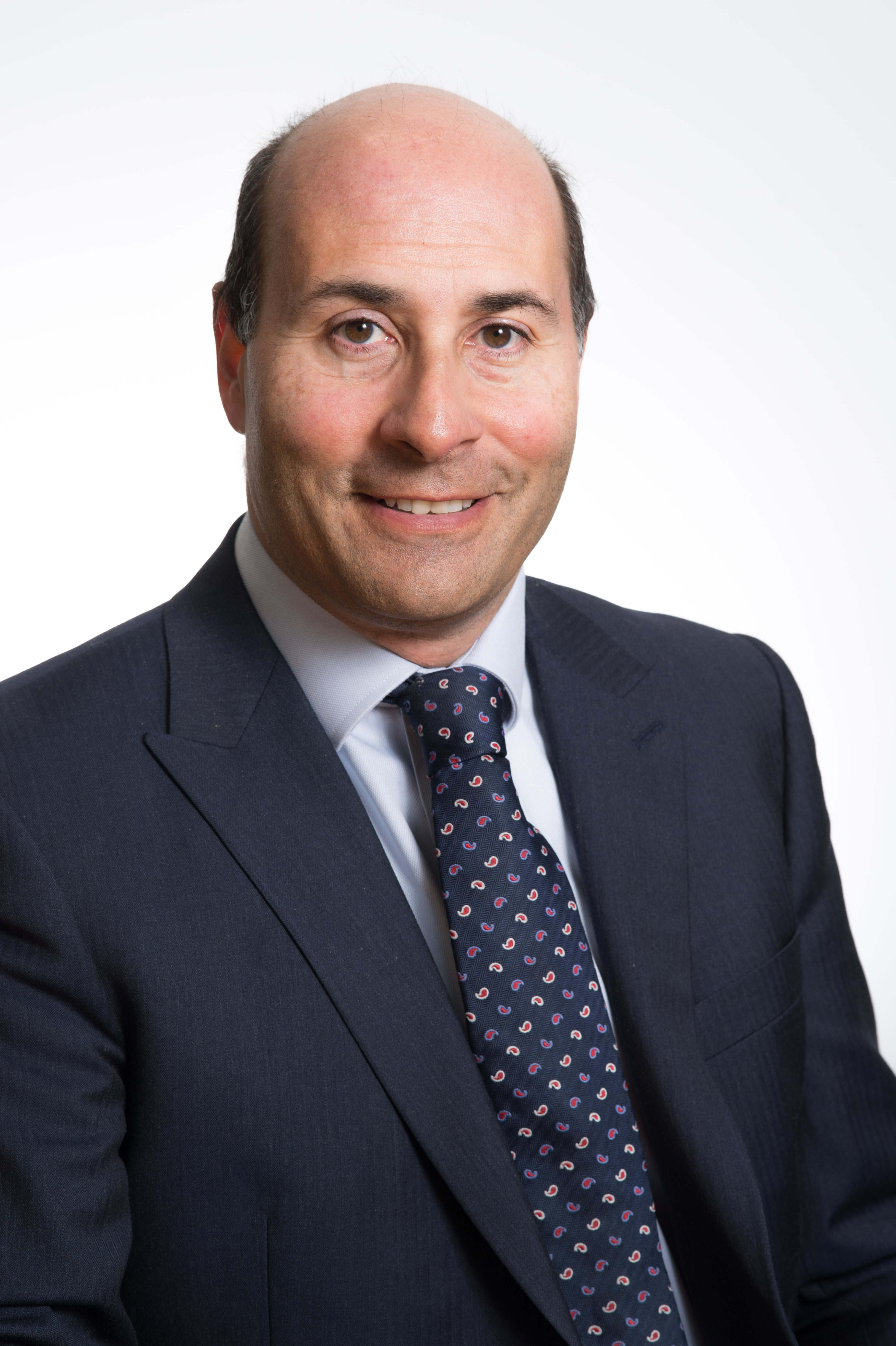 Ilya is a partner with a couple of decades of opposition and appeal experience and is a qualified UK higher courts litigator. He has also been involved in prosecuting over 4,000 patents. He has tutored the UK patent profession on opposition and appeal strategy and has successfully conducted litigation in the UK High Court and IPEC. 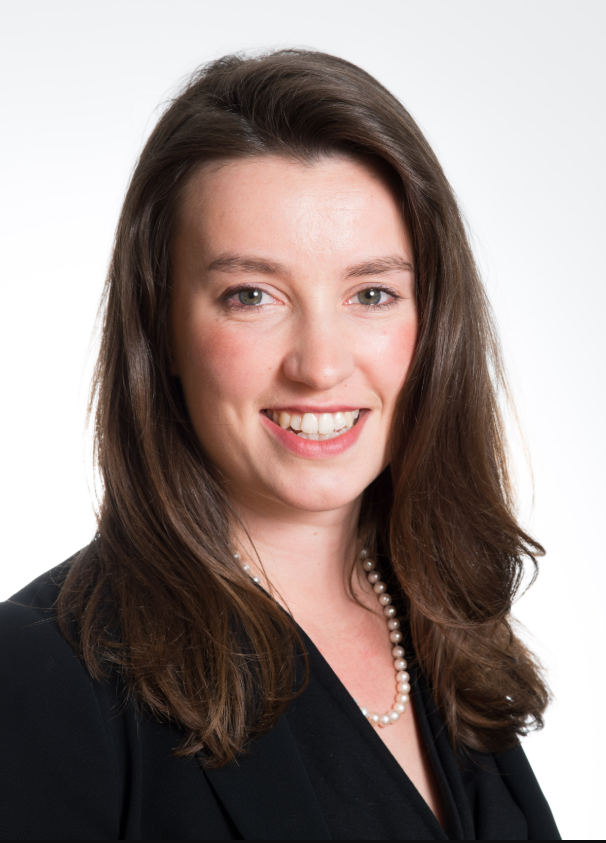 Miranda is an associate who has assisted with and appeared in numerous oppositions and appeals and litigation.