The scope of the claim 1 of the patent after the correction (invention 1) is described as follows:

A compound represented by the formula (I):

1) Interest in filing an action

An interest in filing an action to seek rescission of the JPO decision dismissing the request for trial for patent invalidation still exists even after the lapse of the patent right. This is the case unless there is a special circumstance; there must be no possibility that anyone is subject to a claim for compensation of damages, a claim for return of unjust enrichment, or a criminal penalty regarding conduct during the patent term. Here, no special circumstance was found.

When a cited invention is a prior art disclosed in the publications and the compounds of the invention are described by a general formula which has an enormous number of choices, unless circumstances exist to positively or preferably ascertain the technical idea regarding a certain choice, the concrete technical idea regarding the certain choice cannot be extracted and it cannot be a cited invention.

The cited invention 1 is specified as a compound whose substituent M represents sodium. 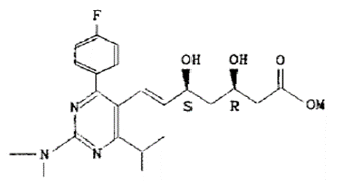 R1 is lower alkyl; R2 is phenyl substituted by halogen; R3 is lower alkyl; and the dotted line represents the presence or absence of a double bond, or the corresponding ring-closed lactone.

A substituted pyrimidine represented by formula (1):

R1 is alkyl; R2 is aryl; R3 is alkyl wherein the said substituent is -NR4R5 wherein R4 and R5 are identical or differential and are alkyl or alkylsulfonyl; X is -CH=CH-; and A is group represented by the formula below.

R6 is hydrogen and R7 is a cation.

The cited reference 2 discloses -NR4R5 as a choice for the substituent R3  as “a particularly preferred compound” among the general formula (I), and also discloses methyl group and alkylsulfonyl group as the choice for R4 and R5.

It is impossible to ascertain from the cited reference 2 how skilled persons should positively or preferentially select -NR4R5 as R3 of the general formula (I) of the cited invention 2. Thus, it is difficult to assert that skilled persons would select methyl group and alkylsulfonyl group as R4 and R5 after selecting -NR4R5.

There will be a dispute in the future about what “enormous number” means. As the court pointed out “at least more than twenty million” in this case, this number will be a good indicator. Whether a certain choice is described as examples is a key factor when deciding whether circumstances exist to positively or preferably establish a technical idea regarding a certain choice, if the cited invention is a patent.

This judgment became final and binding without being appealed.