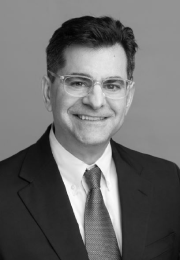 As a founder and shareholder of Dobrusin Law Firm PC, with more than twenty-five years of experience, Eric concentrates his practice in patent counseling and strategic patent prosecution, with particular emphasis in the fields of materials science (including plastics, ceramics, metals and electronic materials), biomedical technologies, and automotive technologies. Eric has been active through the years in alternative dispute resolution (ADR) for intellectual property disputes. He previously served as Executive Director of the National Patent Board, an ADR organization having Rules that he helped to draft. He also has been appointed and served in United States District Court patent litigation as a Special Master, and as an independent neutral for multiple alternative dispute resolution proceedings. He has been on the list of Mediators for the World Intellectual Property Organization.